The 5th edition of the GamePros Hearthstone Fireside Gathering took place on Saturday, September 8. This edition was also a so called Tavern Hero Qualifier. So participants could win points to possibly participate in an official (Hosted by Blizzard) tournament. A nice bonus along side the regular price for first place on a GamePros Hearthstone Fireside Gathering.

The Hearthstone tournament was hosted just like earlier editions at cultural centre the Brikke Oave in Brunssum. This time in a conference hall instead of the regular lobby. Which meant there was less space for our contestants but this shouldn’t spoil the fun.
All of the 16 registered arrived one by one on time and most players were logged in Battlefy within minutes. Logging in and registering players deck, is mandatory to host an official Tavern Hero Qualifier Fireside Gathering. After these administrative tasks the tournament could start.

Because this was the first GamePros Hearthstone Fireside Gathering after the release of the last expansion of Hearthstone, “The Boomsday Project”, there were in comparison to past editions a lot of new decks. We noticed a rise in popularity in certain classes; Warlock, Druid and warrior were particular popular. Especially the “Odd Warrior” deck deserves an honorary mentioning because this deck is all about survival. In other words: When the opponent of an “Odd Warrior” deck was playing with a control deck, these matches could take quite some time. We had to find out the hard way. In some round we had to wait until the “Odd Warriors” survived the match… Or not.

In accordance with the Tavern Hero Qualifier demands the tournament was played in SWISS format, with in total 5 rounds.
Eventually four players with the highest score went through a single elimination format.

The four players who would face each other in the single elimination format were: Kourt vs Enemis and PaulWill6 vs jkirek.

The first match started with a rogue mirror match won by Enemis. Kourt struck back with his Rogue and defeated Enemis’ Hunter but the latter proved eventually to strong for Kourt’s Warlock. With this win Enemis went to the final.

The semi final started with a mirror match as well, but this one were Warlocks. PaulWill6 was the winner and decided the semi final by beating jkirek’s Warlock again with his Hunter.

After these matches it was clear who our finalists were; PaulWill6 and Enemis. In previous rounds they had faced each other before and PaulWill6 was to strong for Enemis with a 2-1 victory. In this final the final score was 2-0 for PaulWill6 and because of that he went home with the prize (and a qualification for the Blizzard Play-offs!). 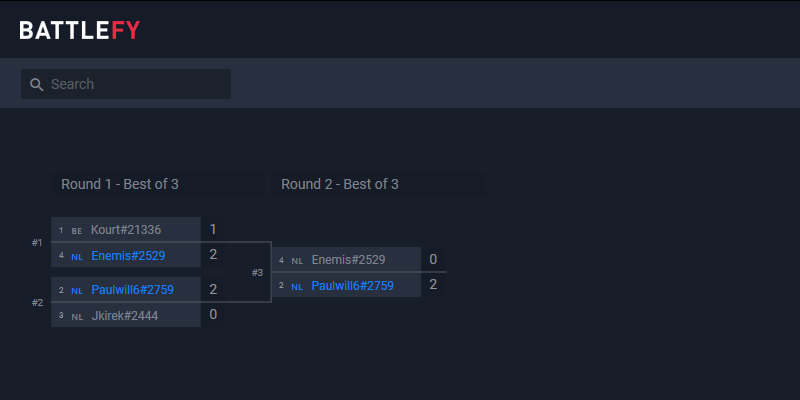 As GamePros we would like to thank the Brikke Oave and all participants for yet an other successful edition of a GamePros Hearthstone Fireside Gathering.

We’ve planned the next edition already: Saturday, October 13, 2018, will be the 6th edition of the GamePros Hearthstone Championship Series Fireside Gathering. This edition is a ‘Tavern Hero Qualifier’ which means you can earn points to participate in official Blizzard tournaments. Be sure to register through the next link.